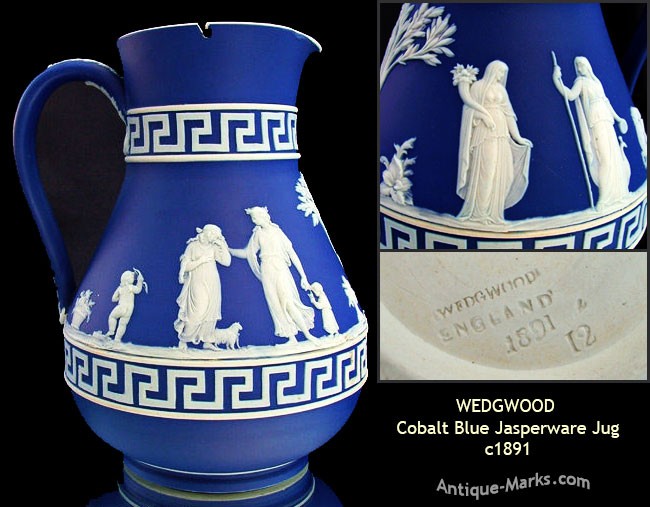 An illustrated list of Wedgwood Marks presented in chronological order

An easy to use chronological list of Wedgwood marks to help the Wedgwood collector, who is faced with many imitators, to date genuine Wedgwood antiques.

Fortunately for the collector, Josiah Wedgwood was the first potter of note to mark his goods with his own name.

Unlike the easily copied potters marks used by other manufacturers, for example the crossed swords mark used by Meissen; the Sevres double L mark, or the Chelsea anchor mark.

Early Wedgwood works may be unmarked, but the presence of the correct mark is an indication that the piece is genuine and should allow you to determine its true age.

Before 1781 very few unmarked pieces can be correctly attributed to Wedgwood.

There are also some interesting pieces around that are marked with USA Patent dates and details.

The standard impressed WEDGWOOD mark occurs on all items that include the three letter code.

The table below shows the year associated with each third letter in the group of three.

The impressed letters first appeared in 1860 with the year letter ‘O’.

After 1891 ENGLAND will appear with the mark.

Again from 1898 the letters A to I are re-used but are easy to differentiate as they also have ENGLAND within the Wedgwood marks.

Wedgwood Antique Pottery and Porcelain for Sale … You can find great deals on Wedgwood Jasperware, Queens Ware and Fairyland Lustre at local Antique Auctions listed in our Antique Auctions finder (soon to be launched).