The Royal Doulton company, the history, the products, Doulton marks and artists monograms.

Your online reference for Royal Doulton Ceramics and Doulton Marks.

Royal Doulton started with a factory at Vauxhall Walk, Lambeth, London, as a partnership between John Doulton, Martha Jones, and John Watts.

The Doulton name has built a long and distinguished pedigree that dates back to 1815.

It was in 1853 that the company took the name Doulton.

John Doulton and his son Henry established themselves as makers of fine English stoneware and though stoneware only allowed for a limited range of colours, they were able to produce a wide variety of items for the luxury market.

During the reign of Queen Victoria (1837-1901) a revolution occurred in personal sanitation and doulton's lead in domestic and industrial stoneware helped make it Britain's top manufacturer of sanitary ware. It also set the firm as a key player in the field of artistic pottery.

By 1871, Henry Doulton had launched an art wares studio at the Lambeth pottery, and offered work to designers and artists from the local art school. It was a great success and the artists included Arthur, Florence and Hannah Barlow, Frank Butler, Mark Marshall, Eliza Simmance, and George Tinworth.

In 1882, doulton purchased the small factory of Pinder, Bourne & Co, at Nile Street in Burslem, Staffordshire – bringing doulton right to the heart of The Potteries.

Doulton proved increasingly popular. because of the artistic direction of John Slater, who worked with a wide variety of figurines, vases, character jugs, and decorative pieces.

In 1901, the popularity of Doulton products came to the attention of the Royal family and the Burslem factory was granted the Royal Warrant by King Edward VII

Between the wars, Royal Doulton became synonymous with the finest English china. The Doulton name and reputation continued to grow along with its extensive range, which included flambé ware, titanian ware, and bone china.

Over the course of its long history the Doulton company has released popular collections of figures and other ceramics.

After World War II, they decided to continue with this collection and introduced six more.

These jugs have coined the term 'The Original Twelve Tinies' and are highly collectible due to to their short production time. The tinies required expert decorating skills, and the artists had to balance the tiny jugs on the end of their little fingers.

The 'Original Twelve Tinies' are:

In 1922, Miniature figures of Charles Dickens characters were produced at Royal Doulton’s factory in Burslem until 1983 and there have been variations in ceramic bodies, size and backstamps over the years.

Sixteen miniature bone china Dickens figures were introduced to the HN collection in 1922 and they were based on earlier stoneware models designed by Leslie Harradine.

In 1939 the collection was rounded off to eighteen models with the introduction of Bumble M76 and Cap’n Cuttle M77. These pre-war figures can be found with the early backstamps ‘Doulton’ or ‘Doulton England’.

In 1949, the series was briefly withdrawn and then re-introduced in a slightly larger size, most obvious is the increased depth of the base and the lack of any identification numbers. Six new characters were added to the collection in that year, making the set up to twenty-four. The Royal Doulton ‘Lion and Crown’ bone china backstamp was in use on all twenty-four figures during this period. When the ‘bone china’ reference is blocked out on the backstamp, this means that the figure was made in English Translucent China, which was first introduced in 1959.

In 1968, the figures increased in size again, (by approximately half an inch) when the clay body was changed from china to earthenware. All twenty-four figures in the collection were produced in earthenware and they were withdrawn between 1981 and 1983. In 1994, a limited edition figure of Charles Dickens himself was commissioned by Pascoe and Company, making a final total of 25 Dickens miniatures to collect: Check Our Royal Doulton Character Jugs for Sale.

The Royal Doulton Figures of the Year.

In 1991, Royal Doulton released its first Figure of the Year. This collection has become one of the most collectable ever produced.

The Royal Doulton Figures of the Year are:

The 'HN' stands for Harry Nixon who was the head of the new figure painting department at the Doulton studio, which included just three artists in the early years. View our selection of Royal Doulton Figurines for Sale.

The Royal Doulton Character Jugs of the Year Collection.

In 1991 - The ‘Character Jug of the Year’ collection was launched with the Fortune Teller and each year these large size characters are Royal Doulton’s best selling jugs.

The subjects of the jugs are very varied, from nautical heroes to literary stars, but the one thing they all have in common is top quality modelling with excellent detail. It is a great honour for the artists to have their work chosen as the ‘Jug of the Year’ and Stan Taylor currently holds the record with five awards, closely followed by David Biggs with four.

Occasionally the ‘Jug of the Year’ commemorates specific events, such as the Jesse Owens tribute that was launched to mark the 60th anniversary of his medal winning games, and the Count Dracula jug, which celebrated the centenary of Bram Stoker’s original vampire novel.

For a brief period, between 2001 and 2003, the ‘Character Jug of the Year’ was produced in a limited edition of 1,000, but mostly they are limited to the year of issue.

The Character Jugs of the Year are:

It was developed over several years by Technical Director Richard Bailey. It effectively removed the high cost of bone china, but still offered fine translucent wares. In short, it had all the right qualities at the right price. It became known as Royal Doulton Fine China and proved an outstanding success.

In 1966, it attained one of the first ever Queen's Awards for Enterprise in the field of Innovation. Today, doultons lambeth ware draws on a rich inheritance. It carefully blends tough, quartz-like compounds with feldspathic Cornish stone for a robust appearance. Modern ceramic technology adds a refined glaze and colour. 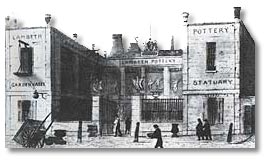 In December 2004, Production ceased at the Doulton factory and in March 2005 the Visitor's Centre closed.

In September 2005, The once bustling 15 acre site closed completely. The land was sold to property developers and another fine part of Englands heritage was lost; to make way for modern housing.

After Wedgwood's acquisition of Royal Doulton on 14th Jan 2005, Royal Doulton left its factory in Burslem and established a production facility in Indonesia. As of 2008 the company was still producing fine bone china, fine china and Royal Doulton Lambethware.