In the Art Deco period Demetre Chiparus created truly stunning works of art full of life movement and adoration for the female form. Knowing how to spot a genuine Chiparus sculpture is essential if you are to avoid the countless fakes, forgeries and reproductions flooding the popular Art Deco collectibles market

Demetre Chiparus is one of the most eminent and recognisable sculptors of the The Art Deco period. His Art Deco sculptures stand as a true representation of Art Deco style, the Folies Bergere, flappers and the age of Jazz. Today his works are much sought after by any collector with an opulent eye and admired and desired by keen Art Deco collectors with deep pockets.

Genuine Chiparus sculptures are rare and can fetch significant sums at auction. However, the most important aspect of the video is that it allows potential Chiparus collectors to examine the actual quality in Chiparus' work. Originally named Dimitri; Chiparus was born in Dorohoi, Romania (close to the Ukrainian border), into a reasonably wealthy family.

However, for most of his life and career, he lived and worked in the French capital city of Paris. A mecca for art and artists in the early 1900's and the post-war roaring decadence of the twenties.

His sculptures are characterised by exquisite modelling of the female form, combining highly decorative and elaborate details with alluring touches of Art Deco style.

His slender long-legged and very life like figures feature glowing faces of crisp white ivory, above sensual and glamorously decorated outfits, inspired by the artists and dancers from Parisienne theatres, the Folies Bergere and Russian ballet troupes.

Chiparus sculptures are truly representative of the distinctive style and age of Art Deco.

Significant Dates in the Life of Demetre Chiparus: born in Dorohoi, Romania in 1889

In 1947 Demetre Chiparus died of a stroke. He was aged 58 and returning from studying animals at the zoo in Vincennes.

How to recognise the work of Demetre Chiparus (typical and distinctive features): 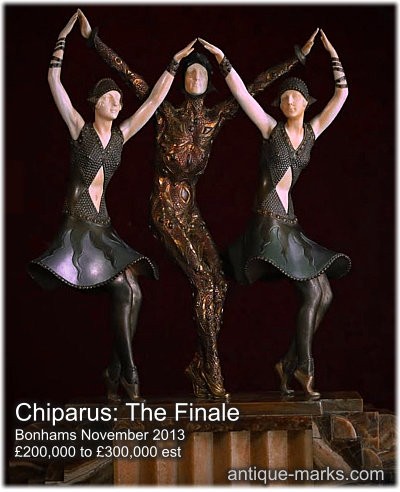 Chiparus sculptures are known primarily for their large lithe female figures, featuring long and slender models, sometimes with stylish hounds or athletic equipment and always with a very stylised appearance, superb detail and an abundance of life and movement.

Figures are predominantly executed in bronze and ivory (using the Chryselephantine technique), which makes them dazzling and highly decorative.

Chiparus did very rarely, produce other sculptures using terracotta, porcelain, spelter or marble. These can be very hard to find.

He also produced some of his Art Deco figures in plasteline. He then sold the reproduction rights to prestigious Parisian workshops & foundries such as Edmond Etling & Cie, and Les Neveux de J. Lehmann.

These high-quality workshops and foundries then produced multiples of these figures, which feature very high-quality castings demonstrating the great detail in the costumes and clearly recreate the life and movement in Chiparus figures.

He produced mainly female figures, influenced from Russian Ballet dancers and the French Theatre or just fashionably dressed Parisian women. The costumes and jewellery of the figures were often influenced by the Orient, and his figures are usually mounted on a marble or onyx pyramid or ziggurat, (a Mesopotamian massive structure).

They can also be carved with Egyptian motifs, inspired by the discovery of Tutankhamen's tomb in 1923. (This also applies to other Art Deco sculptures of the period).

The bronze components on the Chiparus sculptures should be decorated in cold-painted enamel and have crisp well-defined details. Chiparus also produced groups of figures all featuring the same subject matter. For instance; bronze sculptures of stalking or crouching panthers by Dimitri Chiparus can fetch between $8,000 and $9,000 USD at auction.

The sculptor signed almost all of his works with "D. H. Chiparus", which he mainly etched on the base of each figure (see an example for Chiparus mark at the bottom of the article).

In the Last two decades, auction and saleroom prices for Chiparus's work have risen sharply.

Forty years ago, any Art Deco collector could have picked up a Chiparus sculpture from any regular antique dealer, for just a few hundred pounds.

Today, that same piece in genuinely good condition could set you back anywhere from £15,000 to £200,000 from a high-end auction house. For Example; In October 2015 the prestigious Straus & Co, auction house of Cape Town, South Africa will feature a beautiful Chiparus figure entitled Les Amis Toujour, (friends forever).

The sculpture features a central female figure of patinated and cold-painted bronze with typical Chiparus ivory face and neck. She stands adorned by a pair of hounds at her feet. The group is mounted on a brown onyx base, and Straus & Co have an auction estimate of R300,00 to 350,000 Rand (roughly $25,000 USD).

However, the same or similar figure was sold on 15th December 2010, at Christies Auction House in New York, where the auction estimate was also a conservative $18,000 to $24,000 USD, but the actual price realised was a more realistic $68,500 USD.

Buy-It-Now prices range from $4675 to $14,000 USD, high enough to peak the interest of the unwary collector and allow them to persuade themselves they have found an undiscovered masterpiece. Cheap enough to be almost affordable. But a close examination of the rather small images and a thorough reading of the description on each auction reveals all.

Antique collectors can be fooled; we don't all do our due diligence when a rare thing comes our way and desire plays a part.

But we collectors should, particularly when something seems to good to be true. Bargains can be found; the Star Fish sculpture sold at Bonhams was picked up for the princely sum of $40, but they are rare and becoming harder and harder to find. 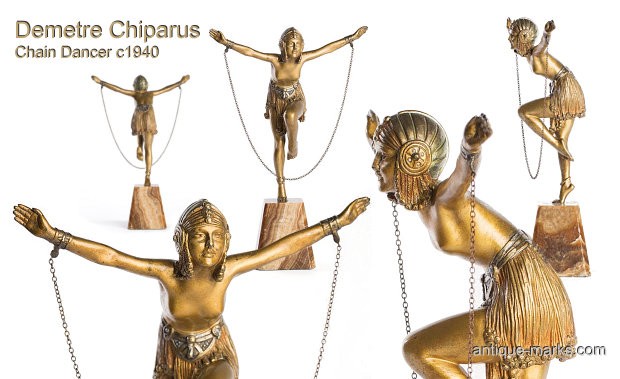 When it comes to Demetre Chiparus sculptures, know what to look for and always make sure that crisp detail, rich movement and other obvious details are there.

More recipes you may enjoy