The antique marks glossary - antique terms O covering everything from oak to oystering.

From oak to oystering; below you will find antique related words for antique terms o and their antique meanings and definitions. 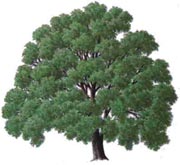 Pale, hard and heavy timber that darkens to a rich brown with age and polishing. It was the main furniture-making wood during medieval times and up until about c1660, a period sometimes referred to as the Age of Oak.

Oak furniture tends to be solid, heavy and simple in design.

From the 1660s, the timber was mainly used for provincial furniture and for carcass work and drawer linings, but was again popular in the arts and crafts movement of the late 19thC.

A tall, four-sided shaft, usually monolithic and tapering, rising to a pyramidal point.

English term, roughly translated as 'precious objects', for small luxury articles in gold, silver or porcelain and often decorated with precious and semiprecious stones, enamel and lacquer. Objects of vertu, such as seals, snuffboxes, bonbonnières and étuis, were popular in the 17th to 19th centuries

Natural glass produced by volcanic action. It is usually black or black-banded, and can be cut and polished and used as a gemstone. 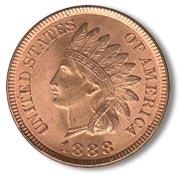 The side of a coin or medal upon which the principal minting authority is recorded, usually the head side.

The opposite side of the coin, the tail, is known as the reverse

Small, portable table which can be moved about easily to suit the occasion.

Navigational instrument which measures the angle of the sun above the horizon. It was invented by John Hadley in 1731, but was superseded by the more accurate sextant in the late 18thC

Double curve shape used to describe an onion-shaped arch of 'S'-shaped moulding and reproduced in many decorative forms.

Clock design that originated in the United States in the 1830s, distinguished by a case where the front outer edges are curved into an S-shape (ogee). The shape is formed by the union of a convex and a concave line. A mass-produced variant of the shelf clock, the ogee clock stands about 30 inches (75 cm) high and is usually weight-driven. See: American Ogee Clocks

Oil gilding disperses reflected light and appears lighter than water gilding from certain angles. It is done with a varnish or an oil-based gold size that will dry gradually and develop a tacky surface. The gold leaf is simply pressed onto the gold size and it adhears to the tacky surface.The method is used to achieve the matt centre seen in traditional lettering and is used to emulate acid etching.

Usually transfer leaf is used this way. It is easier to handle with less wastage and a bright lustre is not critical. When oil gilding on a surface, the size is usually left tacky as long as possible without actually drying to achieve the best burnish. On glass it not critical as the intention is to achieve a matt finish.

The varnish is sometimes left to dry and then water gilded over with plain gold leaf. This gives more of a satin appearance than direct oil gilding, both of which are useful finishes. It should not be left to fully cure

A picture painted with coloured pigments ground in an oil such as linseed and applied onto a prepared surface such as canvas or wood. The finished painting is usually coated with varnish which tends to discolour with age.

A slip bead securing the cord on a Japanese netsuke. See Inro

Japanese sculptured figures usually made of ivory but also of bone or wood. They were made as ornaments for the home during the Meiji (1816-1912) andTaisho (1912-26) periods, and exported to Europe and the USA.

Yellow-green, fine-grained timber with a wavy, mottled grain. It was introduced to Britain from Spain and Italy in the second half of the 17thC and used mainly for its decorative quality, particularly in ornamental veneers.

London workshops founded in 1913 by Roger Fry (1866-1934) to encourage young artists and improve standards of decorative design - aiming to relate modern art to daily life and bring out the creative pleasure of the artist.

Designs were simple and decorated in bright colours, the most successful products being textiles and pottery.

Simple panelled furniture, often flimsy, was bought ready-made from manufacturers and painted in the distinctive style.

Roger Fry belonged to the Bloomsbury Group of writers and artists, members of which, including painters Duncan Grant (1885-1978) and Vanessa Bell (1879-1961), were also involved in the project.

Although the workshops closed in 1919, they heralded a new approach to British 20thC design.

Porcelain decoration first used on 18thC meissen tableware and popular with many other potteries.

The name of the pattern resulted from a misunderstanding.

The stylised pomegranate – one of the characteristic motifs was mis-interpreted as an onion.

Every part of the pattern, every fruit and every plant has its own special meaning. The chrysanthemum represents the melancholy of autumn. The pomegranate is regarded as a symbol of love and fertility. Peaches stand for immortality, while the bouquet of Michaelmas daisies and bamboo portray growth and time.

Pale, hard and heavy timber that darkens to a rich brown with age and polishing. It was the main furniture-making wood during medieval times up until about c. 1660 — a period sometimes referred to as the Age of Oak. Oak furniture tends to be solid, heavy and simple in design. From the 1660s, the timber was mainly used for provincial furniture and for carcass work and drawer linings, but was again popular in the arts and crafts movement of the late 19thC.

Scroll pattern used mostly on the handles of mid- 18thC serving spoons and ladles. It was named after Sir Arthur Onslow (1691 -1768), six times Speaker of the House of Commons. See cutlery.

Translucent white glass developed in 17thC Venice and later made throughout Europe. It was particularly popular in Britain during the 19thC for cheap ornamental wares. translucency was achieved by adding bone ash to the molten glass. When held up to the light, the glass shows slight reddish tones. 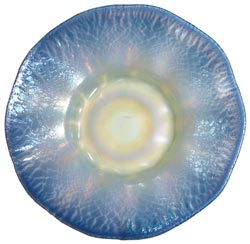 A specific type of iridescent glass developed by the British glass-maker Frederick carder for the steuben glassworks in the USA.

Its appearance, similar to that of a natural opal, was created by cooling the glass object with compressed air and then reheating it. The glass was produced in pink, blue, yellow and green.

Also - American art glass which has a raised design in opalescent white glass against a coloured background.

The technique was developed in the late 19thC, and produced in Britain on art glass and pressed glass.

Pocket watch with a glazed dial exposed to view and backed by a single metal case, dating from c. 1830 into the 20thC.

General term for the decorative technique of cutting variously shaped holes through the body of a piece of silver, furniture or ceramics to form a pattern. See pierced decoration, lace work and reticulated

Mercury-gilded bronze used for figures and decorative mounts on clocks and furniture. The word is from the French ormoulu, meaning ground gold. Highly toxic fumes emanating from the mercury made this process dangerous and it was superseded by electroplating in the mid-19thC.

Swedish glass factory founded 1898. In the 1920s, the factory was known for its innovative engraved glassware, including Graal glass, a form of cameo glass.

Small clockwork or hand-cranked model of the planetary system - a popular astronomical demonstrational apparatus or educational demonstrator during the 18th and 19th centuries. An orrery might complement an astrolabe or a pair of celestial and terrestrial globes in a library or schoolroom.

A low upholstered seat without arms and with or without a back (also known as a Turkey sofa), which was designed to seat several people. The idea was introduced to Britain from Turkey (the Ottoman Empire until 1922) in the late 18thC. The ottoman footstool, introduced in the early 19thC, was used as a fireside seat. A box ottoman has a hinged seat which lifts to reveal storage space below. See borne, divan. 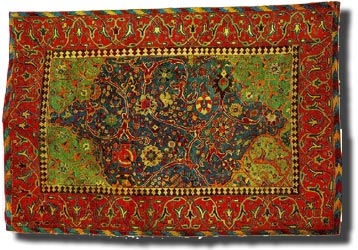 Oriental carpets woven in workshops anywhere in the Ottoman Empire from the mid-16th to the late 17th century,

As opposed to indigenous Turkish weavings of the same period.

Ceramics decorator who worked independently of any factory on bought-in blanks.

In Germany the decorators were known as a Hausmaler and were responsible for some of the best decoration in the first half of the 18thC.

Dutch enamellers decorated Meissen, Chinese and Japanese porcelain and Staffordshire cream ware, and there were several independent studios in Britain from c. 1750 to the early 1800s.

Two-barrelled gun with one barrel above the other.

A term used in ceramics for the method or order of painted or transfer-printed decoration applied on the glaze rather than beneath it (underglaze).

Overglaze enamel colours are mixed with a flux such as potash or lime which enables them to fuse onto the glaze when the article is fired again - at a lower temperature firing than for underglaze high-temperature colours. See: Collecting Antique Ceramics Pottery and Porcelain

Overlay or cased glass refers to more than one layer of contrasting glass, usually of different colors and with or without a clear layer.

The layers can be put together by several different methods, and frequently are referred to as lining, plating, or flashing. Usually the terms "plating" and "flashing" are applied to glass that has a very thin outside layer.

The Romans knew how to make overlay glass. The famous Portland Vase in the British Museum in London is the product of their skill in design and glassworking technique. A shell or cup was formed and set in a container while a gather of a contrasting color was quickly and gently blown into it. The two were fused and the article finished according to the decorative effect desired. 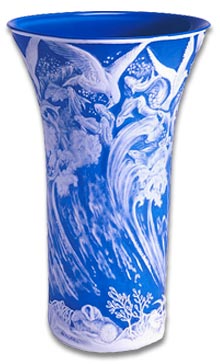 A quicker method of casing is usually called flashing, that is, a gather of one glass is covered with a gather of a contrasting color, and then finished. Using this method a thinner layer of one of the glasses cand be used, saving costly material such as gold-ruby glass.

During the 1860s cased glass cut in patterns was popular for vases, lamps, scent bottles, and other items. The outside layer of opaque white was cut through to form a pattern on the colored layer beneath.

The designs were simple all-over patterns. The cutting of the pattern required a steady hand and accurate eye. This glass is a favourite of collectors.

Cameo glass is a cased or overlay glass where the outer layer forms the design.

The Portland vase is an outstanding example. The undercoat is the background. A great deal of skill is required to make cameo glass using the old process of hand grinding on a rotating wheel. The use of hydrofluoric acid in the latter part of the nineteenth century eliminated or reduced the handcrafted skill to a minimum.

Upholstery in which the padding is carried over the chair-frame edges. Overstuffing was commonly used on early 18thC chairs.

Silver in which the surface is heated to give it a dark coating of silver sulphide. This enhances the shadows on decorated areas. See also patina.

A decorative form of veneering using slices of wood cut in vertical cross-section from the branches of small trees, such as laburnum and walnut, to create a pattern of repetitive whorls on furniture.

The technique originated in Holland.

It was popular in Britain for drawer fronts, and for cabinet and bureau doors from the late 17th to early 18th centuries