Knowing, caring for and displaying your antique carpets, tapestry, samplers and textiles.

The term carpet was originally used to describe coverings for tables, beds, and other furniture and only from the early 18th century was it associated with floor coverings.

The history of antique rugs and carpets from distinct areas is divided into two major traditions: the Asian and the Western.

The older and more opulent carpet is in the Asian tradition and includes makers from central Asia, the Middle East, North Africa, India and China.

The western tradition, derived from the Asian, was established much later. It had a brief period of individuality in France, but succumbed to imitation and to mechanical weaving in the 19th century.

The Origins of Antique Carpets

The origins of the technique of pile-woven carpets in europe are obscure, although asian carpets were imported from early times.

The earliest european pile carpets were produced in 12th and 13th century Spain, which had familiar ties with the islamic world.

All carpets were woven with a single warp knot particular to the spanish.

France was the most important centre of pile-woven carpet manufacture in the 17th and 18th centuries.

Two major weaving centres were Savonnerie in 1627 and Aubusson in 1742.

Both centres were established for the production of carpets based on eastern techniques; today the name Savonnerie is synonymous with luxurious french pile carpets.

It wasn't until the second half of the 16th century and the early part of the 17th century that carpets were produced in England.

The three main centres of production were Kidderminster, Wilton and Aaxminster.

Tips for displaying your antique carpet and tapestry 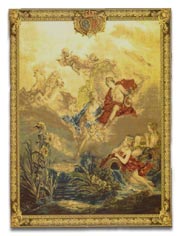 Delicate or rare items should only be wall-hung length ways so that the weight is taken by the warp.

Small items should be mounted by a specialist framer onto a linen backing and fitted into a wooden stretcher and then box mounted with a Perspex window for further protection.

For larger textiles, you should sew wide Velcro tape along the top edge of the back (taking care to sew between the carpet threads and not through them), and staple the receiving velcro strip to a wooden batten fixed to the wall.

Heavy antique carpet and tapestry will need additional support tapes running vertically down the back to help spread the weight.

Dyes can fade in intense light from bright sunshine or spotlights. So use cool-beam, fibre optic or low wattage incandescent lights for any highlighting effect and draw the curtains when a room is not in use during the day.

What to know when buying valuable antique carpets and tapestry ...

New carpets are fine for decoration, but it's better to concentrate on village carpets and kilims woven for personal use instead of purely commercial ones.

However, only by handling older pieces can you learn to appreciate the uniqueness, the beauty and the originality that are a part of textile art.

Commercial weaving incorporates traditional motifs, but you still won't get the feeling of the older pieces, even if the weaver has made a perfect copy of an orignal antique carpet..

There are no fixed patterns, antique carpet and tapestry was handmade and when someone produces something with their own hands, they put a lot of themselves and their own artistry into the creation.

As a collector if you decide to collect antique carpet instead of newer, commercial ones, don't be in a hurry.

You should read various carpet catalogues, which provide an enormous amount of information, and look and touch as many pieces as possible.

You should compare the quality, the designs, the colour combinations, the weaving techniques and everything else about them.

If you choose to use what you collect, then quality becomes paramount and should be your first consideration.

Always select carpets made with vegetable dyes as if the colour is natural, it shouldn't undergo any changes when exposed to chemicals or sunshine.

You can determine if the colours have remained true to the original hues by comparing the front face and the underside of a carpet. There can be a little difference, but basically the colours should be the same.

Collectors should note that in antique carpet, natural dyes don't produce bright colours, only deeper shades, which appear to be shinier than those in new carpets.

Also, older carpets are made from higher quality, hand-spun wool, which is softer and only absorbs the dyes, not external pollutants such as dust and dirt.

It's important to understand that older carpets contain abrage or variations within the colour itself. This occurs because hand spun and dyed wool cannot absorb the dyes evenly. This is natural and not a mistake; a result of the dying process.

Antique carpets also suffer oxidation of the black, and sometimes brown wool. Most blacks oxidize after a period of 60 or 70 years, resulting in a lower pile than other colours in the carpet. This is a result of the amount of carbon contained in the dye and varies with region and origin.

You also find that aniline dyes, (natural dyes strengthened with chemicals), have been used in carpets for the past 150 years. Aniline dyes produce different colours from those of natural vegetable dyes. However, some shades never contain any chemicals, such as cochineal, a burgundy colour made from the secretions of the female cochineal insect.

If you like cochineal, you'll have to look for carpets of 90 to 150 years of age, as that's when it was used in Anatolia.

This sort of rarity makes antique carpets all the more valuable and some places are known for always using specific colours, such as saffron in Konya carpets and the pinks in pieces from Bergama, Kirsehir and Sirvan.

An antique carpet will almost always have repairs, even if it's been put away in a chest or hung on the wall for years. This doesn't affect the value if the repairs have been professionally done. If not, it loses its originality and its value.

Always check the availability of a particular kind of antique carpet. If there are a lot of them around or a significant quantity for sale then that type will not be as valuable as one that is very rarely seen.

Age isn't always the determining factor... you might see a 100 year old rug that can be easily found in the commercial market, but there are some carpets, especially Topkapi woven in the 1920s; that are extremely valuable due to their limited number. The rarer the piece the better the investment.

Remember - Never be afraid to use the antique carpet or tapestries you have purchased, especially those under 100 years of age.

If they are truly old, 200 or 300 years of age, then treat them with great care and always place them in a low-traffic area.

Tapestry is probably the oldest of the flat-surfaced patterned carpet weaves.

Wefts, or horizontal threads, that do not run the full width of the fabric, are the most common hallmarks.

Instead, discontinuous wefts of different colours, form the design patterns.

Soumak, another technique for making flat-woven rugs, originated in the Middle East as early as the 7th century BC., and with this method wefts are wrapped onto the warps in a lateral direction.

Frequently, rows of soumak are alternated with rows of plain weave.

Other flat-woven rug techniques include brocading and embroidery.

In some cases, two or more techniques may be used in the production of a single rug.

This type of coarse rug was woven on a jacquard loom accommodating up to six coloured weft threads.