The Royal Vienna Porcelain factory was founded in 1717 by Claudius Innocentius Du Paquier.

Du Paquier, on studying father d'Entrecolles' letters and after conducting experiments hoped, with the help of Christoph Conrad Hunger, to reveal the secrets of porcelain production.

His attempts were unsuccessful until 1718, when he secured the services of the arcanist Samuel Stölzel, a previous employee of the Meissen Porcelain factory.

During its formative years the Vienna porcelain factory had a very hard time due to enormous economic problems and some of its most valued employees left the factory.

In 1720, Samuel Stolzel returned to Meissen, and took Johann Gregor Horoldt with him.

In the same year Christoph Conrad Hunger left for Venice, where he founded another European porcelain factory.

Up to 1730, they produced chinoiserie, following the Meissen trend. Some of the pieces were marked with a stylised chinese imperial mark.

From 1731 Vienna porcelain production was changed to objects in Viennese baroque style that were unmarked.

However, Du Paquier still had major financial problems and was forced to sell the factory in 1744 to the Austrian empress Maria Theresia.

This began the "State period" when the Vienna shield mark (Bindenschild) the arms of the Austrian court, was introduced.

From 1744 to 1749 the shield mark was applied in red or in blue underglaze, or incised.

Before then the factory produced rococo style wares. After 1760, there was a move towards the neo-classical in the Sevres style. Sevres Porcelain being one of the leading porcelain factories in Europe, at the time.

Between 1750 and 1780, the best pieces destined for the Austrian court were distinguised by a special shield mark in underglaze blue. Seconds were marked with either a red or green 'A' over the underglaze blue mark or by two intersecting nicks over the mark.

In 1784 after a downturn in sales the Vienna Porcelain factory was put up for sale, but a buyer could not be found and the directorship was transferred to Konrad von Sorgenthal, a textile manufacturer from Linz.

Sorgenthal had been raised to the nobility by the Austrian court.

He motivated the factory and succesfully instigated a new period of significant achievement, dominated by Vienna porcelain neo-classical wares.

During the"Sorgenthal period" (1784-1805) an additional year mark was introduced.

From 1783 onwards the year mark was impressed alongside the factory mark.

Sorgenthal died in 1805, but production continued without any significant change until around 1820.

After this quality steadily decreased and after an opinion, expressed in the Austrian parliament, that the state itself should not be involved in production, the Vienna Porcelain factory was closed in 1864

The name Royal Vienna or Vienna Porcelain also refers to a style of porcelain painting that became very popular during the late 19th and early 20th century. 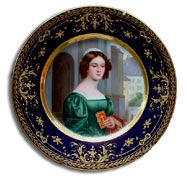 However, there was no single manufacturer called Royal Vienna at that time.

There were actually dozens of large and small porcelain makers and decorators thoughout Germany and Austria, mostly producing magnificent portrait plates, wall plaques and other porcelain articles in the Vienna porcelain style.

The quality of these items varies enormously but the best are very sought after and highly collectable.

A study of these artists paintings would increase any Royal Vienna Porcelain collectors knowledge immensely.