This Doulton plate was a wedding gift to my parents who were married in Scotland in 1945.

by Anne (Victoria, BC, Canada)

The plate has Rabbie Burns in the centre and features nine of his peotry characters around the rim as well as the names of several well known Rabbie Burns poems. 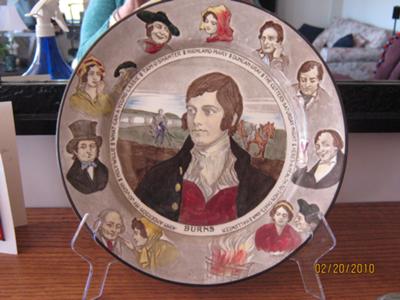 If anyone could help me date this Royal Doulton series ware plate, that would be great.

Can anyone put a date or value to it please?

It belonged to my parents so I am not wanting to sell it but would just like some info please.

Another Doulton Plate by: barnsey
I have one just like this, the Doulton Symbol puts it between 1901 and 1921.

However I can't identify the artists mark,there is no number but the mark looks like a stylised hook in an oval surround. 3 small circles a bar with wavy line through it and a outlined "G" or hook.

Robbie Burns plate by: Harry
Hi there i also have one of these Doulton plates and mine has a marking on it D6344 on the back of it.

Ccan someone help me and give me an estimate of its worth thanks, its the same one as Anne has got Cheers

Nice Doulton series ware Plate by: Kat
Hi your plate appears to be a piece of Doulton Seriesware.

That's about as much as I can tell you based on your information and without actually seeing the plate.