Pressed glass has been dismissed by serious collectors and the wealthier elements of the population throughout the years, simply because it was aimed at the mass market. But like most things that appeal to the majority of the population, pressed glass has moved up in the World and is now fashionable enough among the more well to do, that glass collectors are sitting up and taking notice.

The introduction of pressed glass revolutionised the way in which glass was manufactured and its availability to the general population. For the first time, ordinary people were able to buy affordable decorative glass objects as well as domestic glassware. 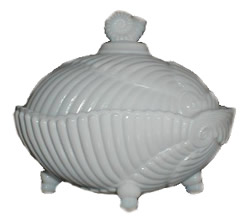 Good quality pressed glass can now be worth a lot of money with items in mint condition reaching thousands of pounds.

Coloured items, particularly blue and yellow are very sought after and command high prices, whereas flint is often cheaper. Pressed glass has been dismissed throughout the years because it was aimed at the mass market.

Critics simply ignored the ground-breaking manufacturing techniques used in glass making and the artistic qualities of the glass.

Unlike hand-blown glass which was time-consuming to produce, pressed glass was produced using moulds.

Later, these seam lines would be polished out unless they were hidden in the intricate design. Initial products were made from clear glass, but gradually colours were introduced. In the past, the glass was dismissed as junk purely because some of it was ugly. Only the Victorians could have created a glass vase decorated with animals that have swans heads, lions feet and huge wings.

Adding rare and collectible examples of Pressed Glass to your glass collection is a positive move.