To trace the history of Naples Porcelain you have to look at the origin of Capodimonte Porcelain.

The masterpieces of the Royal Factory of Capodimonte are astonishing in their demonstration of Italian skill and craftsmanship.

In little more than half a century the Royal Factory at Capodimonte produced the finest porcelain and ceramic dinner ware and ornaments in its own superb, unique and complete style.

In particular the Bisquit which does not redden with age (unlike those of Saxony and Sèvres) and the miniatures, which are beautifully modelled and of superb detail; and which are said to be the rarest and most prized of all European Porcelain.

The father of Capodimonte porcelain is considered to be Charles of Bourbon (1716-1788) son of Philip V of Spain and his second wife, the Italian, Elizabeth Farnese. 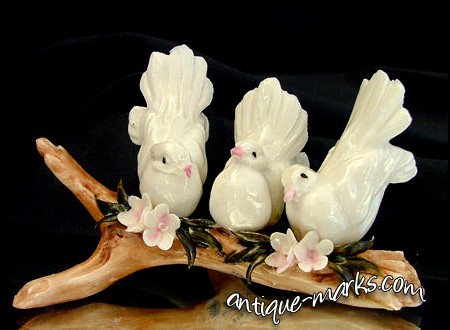 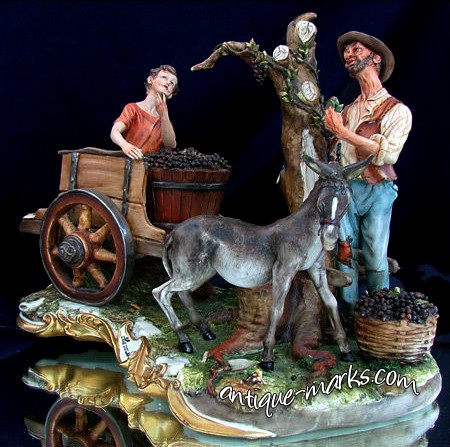 Of significant proportion at 16" by 10" and 11.5" tall. Beautifully modelled and superbly detailed, particularly the cart, the grapes and the Donkeys facial expression as it shies from the nasty frog.

With Capodimonte Crowned 'N' to the underside together with date cypher. The artists Signature mark, 'Volta' to the rear face and the title 'La Vendemmia' within an ornately scrolled and gilded cartouche.

With rococo moulded leaf decoration picked out in green

The use of rococo ornament was short lived at Real Fabbrica factory before they embraced neo-classicism. 15.5cm high - c1775

Painted with a half-length portrait of Prince Charles Stuart, Bonnie Prince Charlie, in armour wearing the sash and star of the Garter and the green sash of the order of the Thistle.

The gold and enamel mounts are by a London goldsmith.

Possibly the only example of porcelain from the Royal Bourbon factory of Capodimonte in Naples with an English or Jacobite connection.

Filippo Tagliolini worked as a modeller at the Royal Porcelain Factory of Naples and was active between 1771 and 1807.

The Judgement of Paris is a bisque porcelain sculpture and one of his most famous creations.