A Guide to Moorcroft Marks and identifying dates for Moorcroft Pottery.

The moorcroft pottery has mainly remained in the hands of one family since its creation and Moorcroft mark changes have been quite few.

The main Moorcroft marks changed as William Moorcroft moved from Macintyre & Co, at the end of the 19th century and then when Walter Moorcroft took over from his father.

The Moorcroft marks remained steady until the modern owners instigated a system of dating and then again until modern Moorcroft design studio artists, where allowed to mark the Moorcroft pottery they personally designed or created.

Moorcroft collectors should be aware of the Silver Stripe that sometimes appears and is almost always through the WM monogram.

The Moorcroft silver stripe denotes a second quality or imperfect piece that has failed to pass the strict quality control that Moorcroft demands. These pieces are only ever sold at discounted prices in the Moorcroft factory shop. 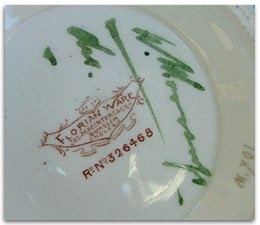 Typical early Florian ware mark in brown with handpainted W.M initials in green with 'des' below. 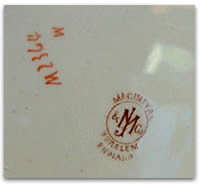 Can also be found in black.

Sometimes with the pattern registration number (Rd No.) 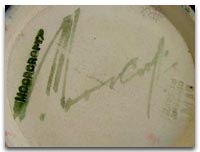 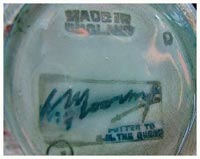 Impressed stamp mark used with facsimile signature and having 'Potter to HM Queen' at bottom right.

Used prior to and alongside the introduction of the paper label. 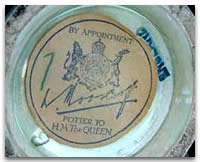 Early version of the Royal Warrant paper label - 'Potter To HM The Queen'.

The label was updated in 1936 to read 'Potter To HM Queen Mary', following the death of King George V. 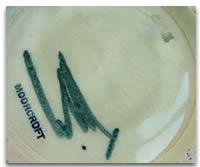 Walter Moorcroft initial mark with MOORCROFT and MADE IN ENGLAND.

Earlier Walter Moorcroft initials used a slate blue colour to differentiate
it from his father Williams. 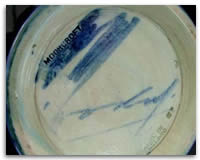 Walters full script signature mark was only used on important pieces,
one off pieces for exhibition or limited editions.

Large impressed MOORCROFT with upper case MADE IN ENGLAND.

Occurs with and without Walter Moorcrofts monogram 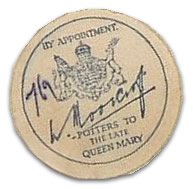 Moorcroft Royal Warrant Paper label transferred to Walter Moorcroft in 1946 and stating 'By Appoinment
Potters To The Late Queen Mary'.

The Royal warrant expired in 1978 on the anniversary of Queen Mary's death. 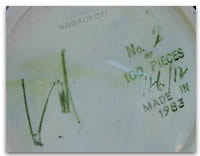 Possibly signed by a paintress as Walter did not sign every single piece. 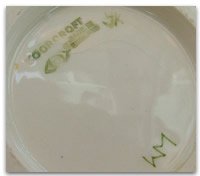 William John Moorcroft initial mark appears now 'John Moorcroft' is a director of the company and Walter a consultant. 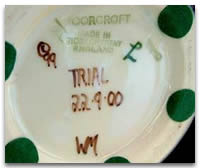 With upper case MOORCROFT and Stoke On Trent above ENGLAND.

With trial date, copyright and WM in brown.

Older trial pieces will not have as much information. 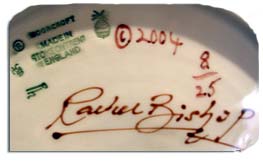 Showing the complexity of the modern mark with full signature, copyright mark and year cypher together with the standard MOORCROFT - MADE IN STOKE ON TRENT - ENGLAND