It is a well preserved Derby imari dish in excellent condition and of quatrefoil form with twin reticulated handles supporting acorn finials.

It is beautifully decorated and profusely gilded and is taken from design number 2451 featured in Derby’s pattern book 6.

This Derby pattern was initially introduced in 1887, however the dish bears requisite printed and impressed marks for Royal Crown Derby c1933.

It is fully marked to the base with the Royal Crown Derby Osmaston Road crown mark. 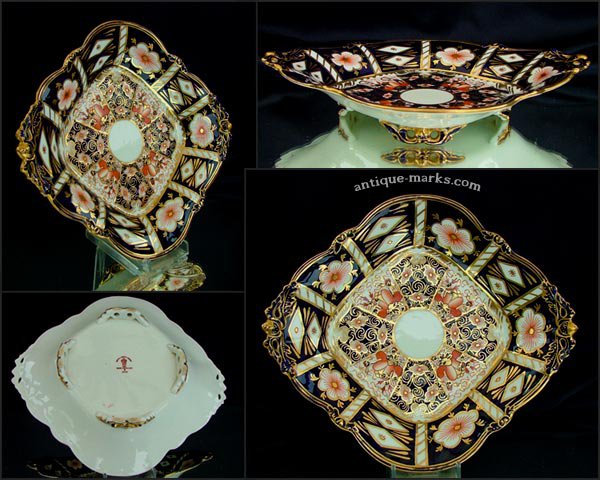 During this period Royal Crown Derby produced some of the most popular and collected versions of Derby porcelain ever created.

It was originally designed to imitate the popular Japaneses Imari porcelain that was manufactured in Arita in Hizen Province.

This was exported to Europe in the 17th and 18th centuries, when it became highly desireable and led to Derby porcelain being recognised by the Monarch.

Collectors of the more traditional patterns will find plenty to choose from, in our Derby Imari Porcelain section.