The history of the Chelsea Porcelain company, its products and its anchor mark periods.

The Chelsea porcelain factory was founded in 1743 by two Frenchmen; Charles Gouyn a goldsmith and Nicholas Sprimont a silversmith.

Its early soft-paste porcelain products were aimed at the aristocratic market.

The first director Nicholas Sprimont was a silversmith by trade, but few documents survive to put together a comprehensive picture of the manufactorys history.

Nicholas Sprimont and Charles Gouyn remained partners in the firm until 1749, when Gouyn retired and Sprimont became the sole owner of the company. 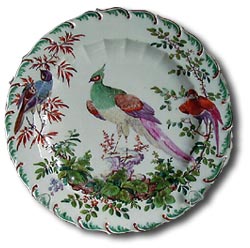 Early porcelain tablewares were produced in bulk by 1750, and were bases on meissen porcelain models and on silver prototypes, such as salt cellars in the form of realistic shells, for inspiration.

Chelsea porcelain is also well known for its figures and from about 1760 its inspiration was drawn more from the French company Sevres porcelain than from Meissen.

In 1750, the doors of the Chelsea Porcelain works were first opened

During the anchor marks periods Nicholas Sprimont was the ruling force at the Chelsea factory.

In 1769, the Chelsea factory was purchased by James Cox, who then resold it in 1770 to William Duesbury, who owned the derby porcelain factory.

Porcelain wares were marked with a combination mark formed from the Chelsea anchor mark and the Derby D mark.

The first wares produced are generally indistinguishable from other Derby porcelain wares and this period is generally called the Chelsea-Derby period.

The merger lasted until 1784, when the Chelsea factory was demolished and its moulds, patterns and many of its workmen and artists where transferred to Derby.

William Duesbury continued to grow his small porcelain business and in 1775 his hard work was rewarded by King George III.

The King awarded Duesbury the rare honor of being allowed to incorporate His Majesty’s Crown into the Derby backstamp. The company then became known as Royal Crown Derby. 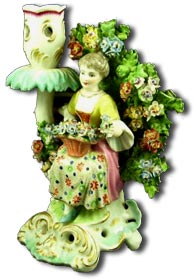 The Chelsea-Derby company was passed to his son, William Duesbury II, who was educated and raised close to the porcelain business.

William II made an excellent leader and he developed a number of new glazes and body types, but unfortunately, he died in 1797 at the young age of 34.

The company then passed to Michael Kean, who was unable to maintain standards and the derby reputation and name began to decline.

It was during Michael Kean's period that many well known and highly regarded artists left in pursuit of other opportunities.

Chelsea Porcelain production can be divided into four main periods, named for the identifying makers marks :

In the 1750s and 1760s, Chelsea was also famous for its toys
These included bonbonnières, scent bottles, étuis, thimbles and small seals, many with inscriptions in French.